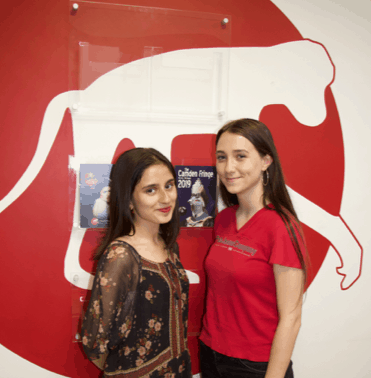 I am Samar Khan, and I spent a week at Fourth Monkey learning about what exactly they do. My general desire to broaden my horizons on the opportunities in theatre (particularly actor training) was fulfilled successfully by the intensive week I experienced at Fourth Monkey.
It is my final day of work experience at the company, and I’m writing a short blog about what exactly I learned alongside working with Scarlett (another work experience student from my school) and what I personally gained from the things I experienced with the staff and the cast.

On the first day, I was given a research task which enabled me to understand the tone and structure of First Monkey as an actor training company – and why it is individual in comparison to others. I part-took in an in-depth conversation with staff, who explained to me the structure of each term at the institution and just how demanding yet enriching it is for actors. Fourth Monkey makes it clear that they are immensely focused on physical theatre, and I was able to observe this once I attended my first rehearsal of theirs lead by Julian and Matthew (overlooked by associate company Rum and Clay). This gave me a great insight to the practicality of Fourth Monkey’s approach to theatre, and the most striking element was the unity that flooded the room. Despite the students knowing each other for mere weeks, their boldness and confidence when working with one another came as an indicator for the homely environment of the building and the company as a whole. There is a well-balanced academic relationship between all of the trainees and the teachers that allows the students to further grow in their personal excellence, aligning with their reason for an extremely high retention rate once students have left.

On Tuesday, I observed a second rehearsal for an upcoming show, ‘Witness’, written and directed by Fourth Monkey’s own alumni Mia Jerome. The play contains dark subject matter, however the students were informed and committed to creating a safe space for the performance to be executed successfully without any concerning repercussions, a mature and meticulous approach to creating a well informed and articulated piece of theatre. I learnt that at Fourth Monkey they safely push you to your limits, and in the most comfortable way possible. The physical element is highly demanding, but every student had the perseverance and correct attitude to commit to it regardless. In the afternoon, we attended a meeting with Islington Council regarding offers that Fourth Monkey may come to contribute, such as the 11:11 programme to expand cultural experiences – allowing students who haven’t realised their personal hobbies and/or career prospects to become more prominent in their lives. The meeting was very helpful in terms of my understanding regarding Fourth Monkey’s growth, and the impressive selection of opportunities that will be expanded upon on top of everything else they already provide to the students and the public (workshops, shows, mini courses).

Scarlett and I both have interests in theatre, but we vary in area of interest. Fourth Monkey accommodated to this by showing us all elements, such as the role of stage management to observing rehearsals for voice support (lead by Harriet, Head of Voice at Fourth Monkey), a large coverage of the many sessions that Fourth Monkey train you in to make you an all-rounded success with the right qualifications to enter the industry. Later on in the week, we observed another rehearsal for an upcoming immersive production of ‘Valhalla’ directed by award-winning Rich Rusk. This was my personal favourite part of my time at Fourth Monkey. I intend on directing and producing theatre and film in the future, and so observing how Rich both organised and communicated with the cast about this extremely onerous production was very informative and inspirational. The timings for this show are extremely tight and emphasis was put on the difficulty of the movements, however the cast were focused and determined in committing to defeating its obstacles, common to the company’s overall ambience, ‘Be bold and play’. Later, Neil briefed us on coming to grasps with marketing in Fourth Monkey’s social media. We had a brief discussion about the power and influence of social media, and the way in which we could further improve Fourth Monkey’s platforms and address its strengths in order to reach more audiences. I highly enjoyed this, because it made me learn even more about why Fourth Monkey is unique to other actor training schools. The atmosphere of Fourth Monkey is something to be admired and preserved by the walls of the building, and this is assisted by what is achieved in their productions.

I strongly enjoyed the experience I had at Fourth Monkey, because it gave me in depth knowledge about their way of approaching actor training and consolidated my intentions of entering the industry in terms of my career prospects. I wished I had been given more time of experience if anything – because I would have been able to take time to actually take part in some of the activities, I oversaw during my time there. Despite this, I was given essentially an immaculate overview of what a professional, successful actor training company looks like behind the statistics and posters, which definitely lived up to its high expectations. I would highly recommend looking into the work that Fourth Monkey does at any level to people my age who are interested in theatre. I’m still not 100% sure what exact field of film and theatre I want to see myself in yet, but this helped me understand the possibilities that are out there.