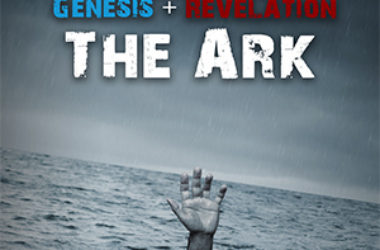 ‘The Ark’, written by Steve Green and directed by Stephen Sobal, is a contemporary retelling of the story of Noah that offers a threefold address of the Refugee Crisis. The narrative goes between three distinct worlds; three distinct exposés of characters bearing involvement with the journeys of migrants towards the EU countries: representatives of the EU; a group of refugees which form the play’s chorus; and the family of Noah, now entangled in the trafficking of refugees. These worlds, rarely having direct interactions with one another, are united by the chorus’ journey and a voice which provides narration as to the world state in a way reminiscent of the omniscient narrative voice in Genesis.

Stephen Sobal creates theatre from a place of fun and bafflement. On a fundamental level, it appears difficult to marry such a process to a play as ‘The Ark’, a play firmly rooted in the issues of the present day. The creative process begins, therefore, with a large amount of research into the issues surrounding the Refugee Crisis; the original story of Noah; the political state of the EU; and ensemble bonding exercises. These activities serve to unify the cast within the realm of the play, having lead to lengthy and weighted discussion of contemporary society and the relationship between the playwright’s depiction of these issues and our own perspectives. The frank exchange of ideas before scenes are worked provides a strong basis for collective understanding of our aims with ‘The Ark’.

Due to the heavy nature of ‘The Ark’, the rehearsal process cannot always be strictly described as ‘fun’. Where this word is not applicable, ‘frank’ is a worthy substitute. Sobal works in a direct and advisory manner with the cast, allowing individuals and the ensemble to inject scenes with their personal interpretations and impulses before he begins to add detail and refinement to the sculpture thereby created. The dynamic which Sobal keeps with his actors allows for an open channel of communication that makes discussion of the tense topics addressed in ‘The Ark’ easier than they ought to be, allowing the cast to preserve emotion and infuse it into their performances without letting it become an all-consuming focus of the creative process.

The nature of the rehearsal process for the cast remains consistent, however the distinctly different styles of the three worlds of the play causes the tone and topics of discussion to vary from day-to-day. Whilst scenes involving Noah’s family are treated with a naturalistic, introspective touch, the EU ambassadors offer a larger than life contrast to these quieter moments of conflict with bouffant and explicit address of the socio-political landscape in Europe. Between these two vast extremes – and not at all similar to them – is the world of the migrants, incorporating the theatrical idea of the chorus; percussive sonic elements; and spoken word poetry. The visual spectacle with which Sobal heightens the comic elements of the EU scenes is paralleled by a highly physicalised and sonic synchronisation which the chorus has been working with since their first rehearsal. It is due to the ensemble ethos of Fourth Monkey and the extensive work that the cast have been doing throughout the year and in our research preparation for ‘The Ark’ that such co-ordination and complexity is achieved in the brief intensity of a three week rehearsal process.

The separation of worlds through scene transitions in ‘The Ark’ makes it common that different parts of the cast will not be sharing the rehearsal space for some portion of the week. This has not proven divisive to the ensemble energy which drives the play: contrarily, this has fuelled the cast’s excitement to bring together a cohesive and challenging piece of theatre. It allows us to view the scenes in which we do not directly participate with a fresh perspective and eager attentiveness to detail and performance. We sit, wide-eyed and open-mouthed in regard of the work that other cast members have been creating in our absences – not dissimilar in sentiment to the fun and bafflement which Sobal has been bringing to the rehearsal room since day 1.

Steve Green’s ‘The Ark’ has been an emotionally, intellectually, and physically engaging piece of work for the monkeys. Many of the cast members are in agreement that although theatre aims to change and engage with society and contemporary ideas, much of our past acting experience has not dealt so explicitly with the issues that are having an active local and global effect with every passing day of the rehearsal process. Led by Stephen Sobal, the cast of ‘The Ark’ prepare to finalise the work that we have been developing this season, staying abreast and affirmed of the reasons for this play’s significance without losing our creative sense of fun; frankness; or bafflement.