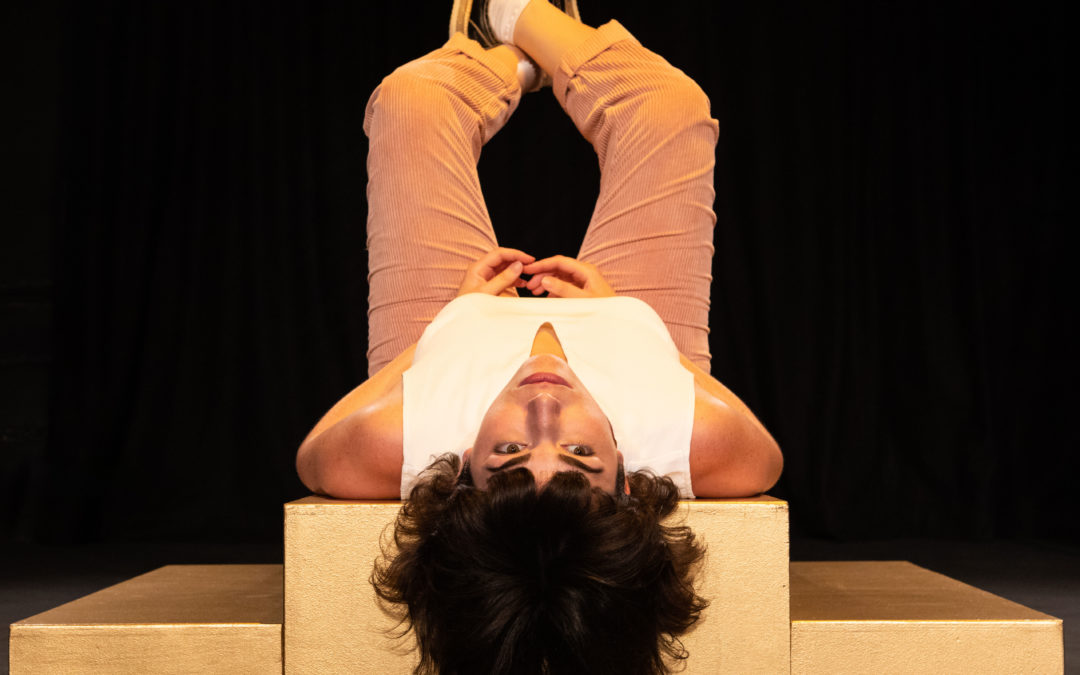 Touted as one of the Guardian’s “12 theatre stars for 2020” emerging talents to look out for over the next 12 months, Fourth Monkey Alumni Sadie Clark (2 Year Rep, Class of 2014) is gearing up to take her debut piece Algorithms to the Soho Theatre in March.

Loosely described as a one-woman ‘rom com’ for the online generation about wondering why everyone else is getting it so right, we spoke to Sadie about how she devised and developed the project, what or who inspired her when creating Algorithms, and life after Monkey…

Tell us a little bit about your initial idea or inspiration behind Algorithms? Where did it come from?

If I’m honest the play came out of a pretty bleak time in my life where I was incredibly depressed and anxious. I didn’t feel like my life was panning out the way I’d expected it too, and this was exacerbated by comparing it to the curated online world of friend’s filtered Instagram posts and Facebook statuses. It seemed like everyone else was so much more sorted and happy than I was. I wanted to explore the negative impact social media was having on my mental health, and how it’s possible to feel incredibly lonely and isolated even in a digital world where connecting with others is meant to be easier than ever.

I also knew I wanted to write a protagonist who was bisexual. I felt strongly that had I seen more bisexual characters in pop culture growing up I would have realised I was bi much earlier in life. We rarely see openly bi characters on stage or screen. I felt it was important to depict a bi character, and one whose story wasn’t defined by her sexuality, it was just a part of who she was. 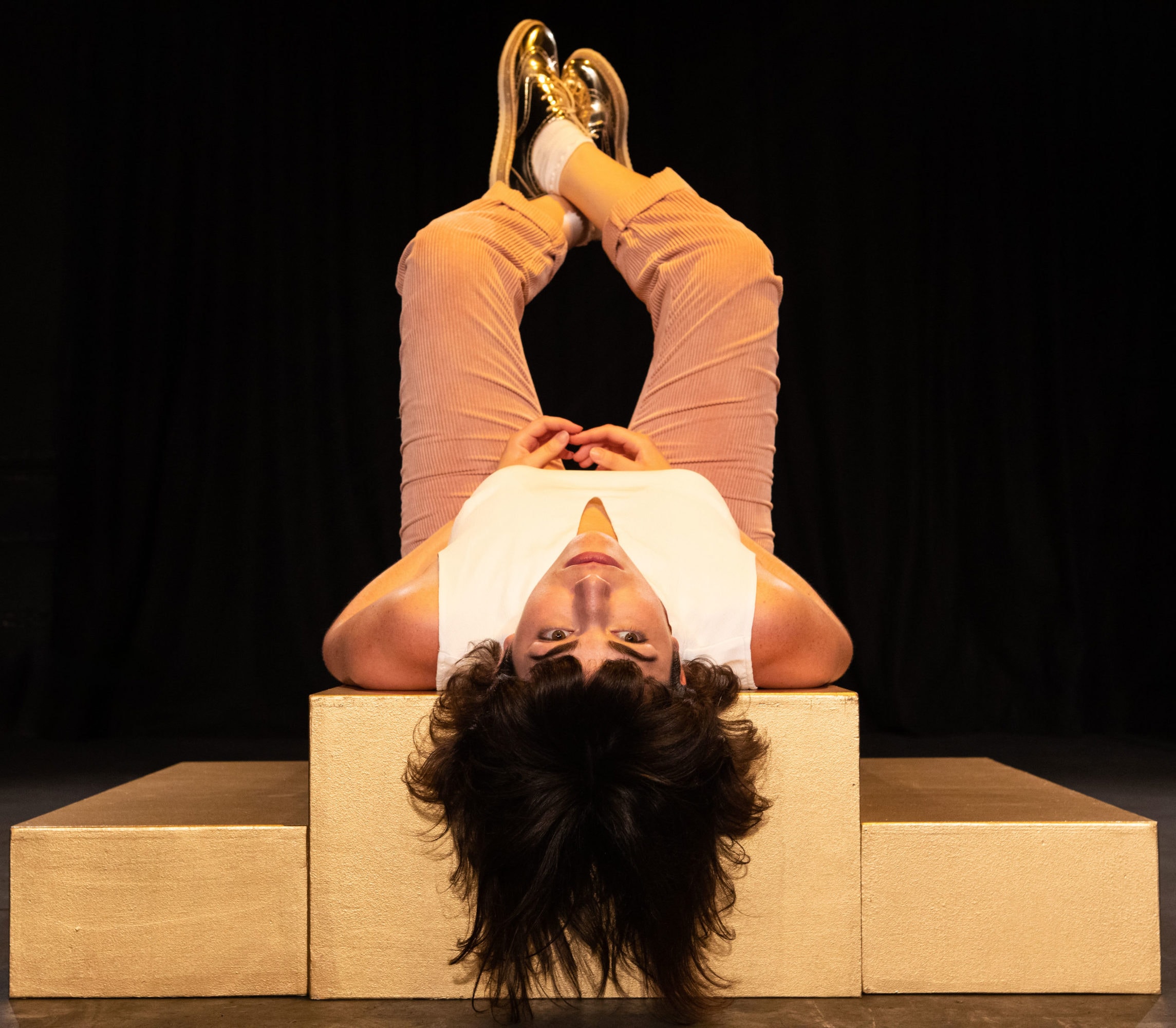 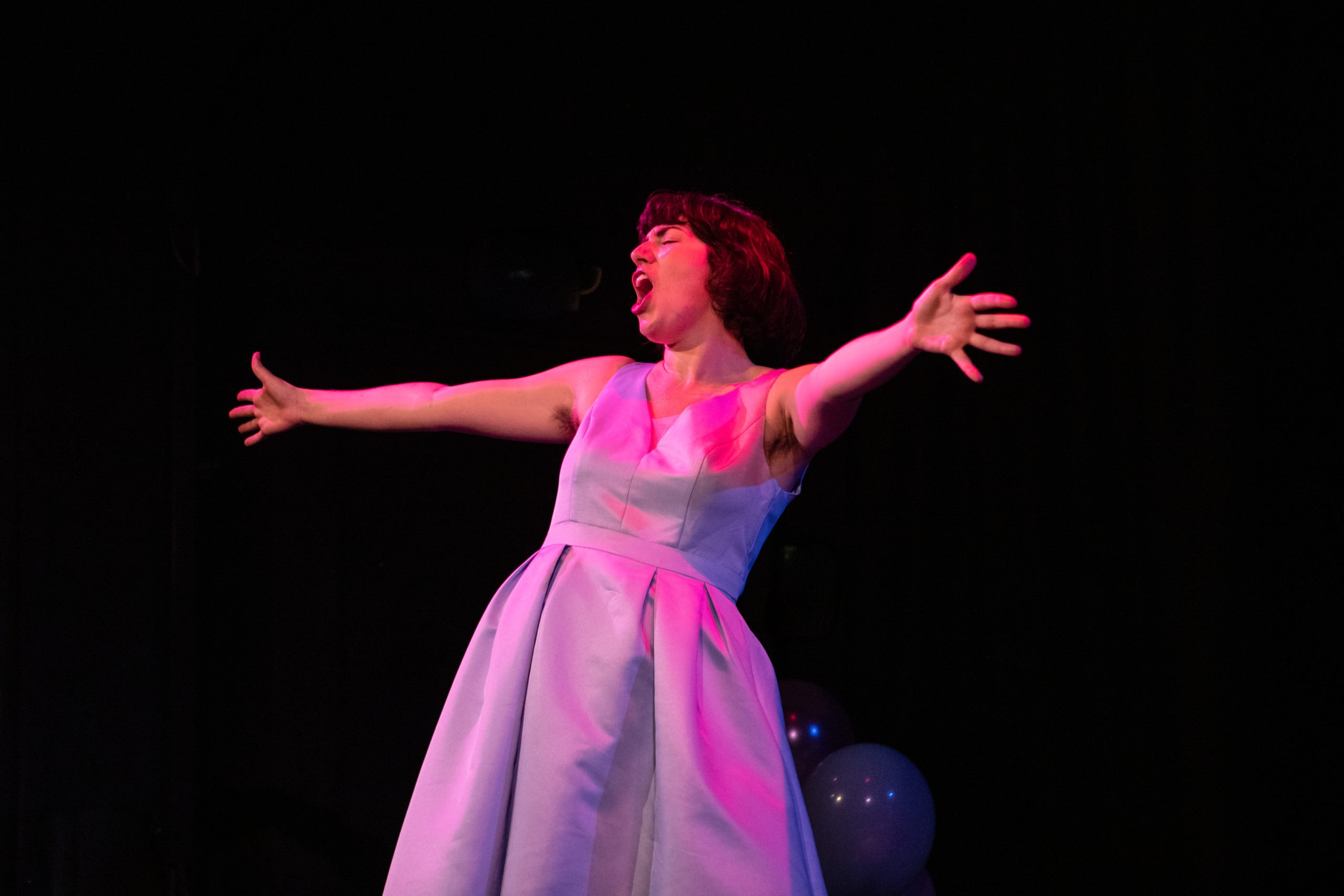 For anyone not familiar with the play, can you give us a brief overview of its central themes?

So the answer to the last question probably made it sound pretty heavy going and it’s really not! Algorithms is like Bridget Jones’ millennial, bisexual, younger sister. It’s a tragicomic one-woman play that follows Brooke, the algorithm writer for an online dating site as she searches for love, happiness and connection in a world defined more and more by online interactions. You’ll probably relate to it if you’ve ever wasted hours on social media wondering what you were doing with your life, ever felt lonely, ever pined for a better way to meet people than Tinder, or ever wished your Mum would stop asking why you were using WhatsApp so late on a work night… There are loads of proper laugh-out-loud moments, maybe the odd tear or two and some seriously funky dancing!

Algorithms is a one-woman play – could you tell us a bit about how you went about developing, devising and rehearsing it and whether you had any collaborators along the way?

I began writing it on the Soho Theatre Writer’s Lab, a nine month course aimed at helping emerging writers develop their skills and draft a play. Everyone gets assigned a dramaturg who gives feedback on two drafts. My dramaturg, Jules Haworth, was invaluable and helped shape the play in its early stages, asking the right questions that helped to develop the central character and story. After I submitted my third draft to Soho’s Tony Craze Award I gave it some breathing space and came back to it a couple of months later when I did my biggest redraft yet based on notes from my director Madelaine Moore. The next step was getting it on its feet: I did a script in hand WIP performance which Maddy directed. That ran way too long at 90 minutes but it was useful to hear how audiences responded, and Jules, who stayed on as my dramaturg, helped me to cut it down to the 60 minutes I was aiming for. By this point it had been programmed as part of Soho Rising Festival at Soho Theatre, so Maddy and I worked together on what the set and costume would be, as well as having a full week of rehearsals on it where Maddy re-blocked sections. One person shows can be tricky because it’s down to a single actor to create the other characters on stage, build a sense of the changing locations and time. Algorithms is set in a ton of different places in the run up to Brooke (my character’s) 30th birthday so clarity was a big challenge and one we worked on a lot in rehearsals. Having a lighting designer, Jennifer Rose, and later a sound designer, Nicola Chang, come on board also added a huge amount to defining location and time. Even though it’s written and performed by me it feels very much a collaborative effort that’s created the show as it is now.

What made you decide to choose a solo piece for your debut play? Any positives or negatives to being the only person on-stage every night?

Ha ha, honestly? It’s cheaper to do a solo show… Of course that wasn’t the only reason, I’d worked a lot collaboratively in the three years between graduating from Fourth Monkey and deciding to write a solo show, so there was something appealing about having full creative control and a singular voice. But I’d be lying if I said the cost effectiveness of taking a solo show to Edinburgh, which was my goal, hadn’t factored into it.

Most of the time I love being the only person on stage. It’s actually pretty magical knowing it’s you alone that has to build a connection with the audience and weave a story so engaging you captivate them for the next hour. Plus I enjoy getting to play multiple parts and I revel in the limelight. However, it can feel a bit lonely at times. It’s especially hard when you feel like you’ve had a tricky show and there’s no-one to share that with. Edinburgh in particular was tough for that as you get all sorts of people catching shows for different reasons up there. There’d be the odd one where someone had fallen asleep in the front row or I could tell that someone had been dragged along, hungover, by their girlfriend and really didn’t want to be there, and it was kind of tough on those days not having anyone to have a post show ‘shake it off’ with. 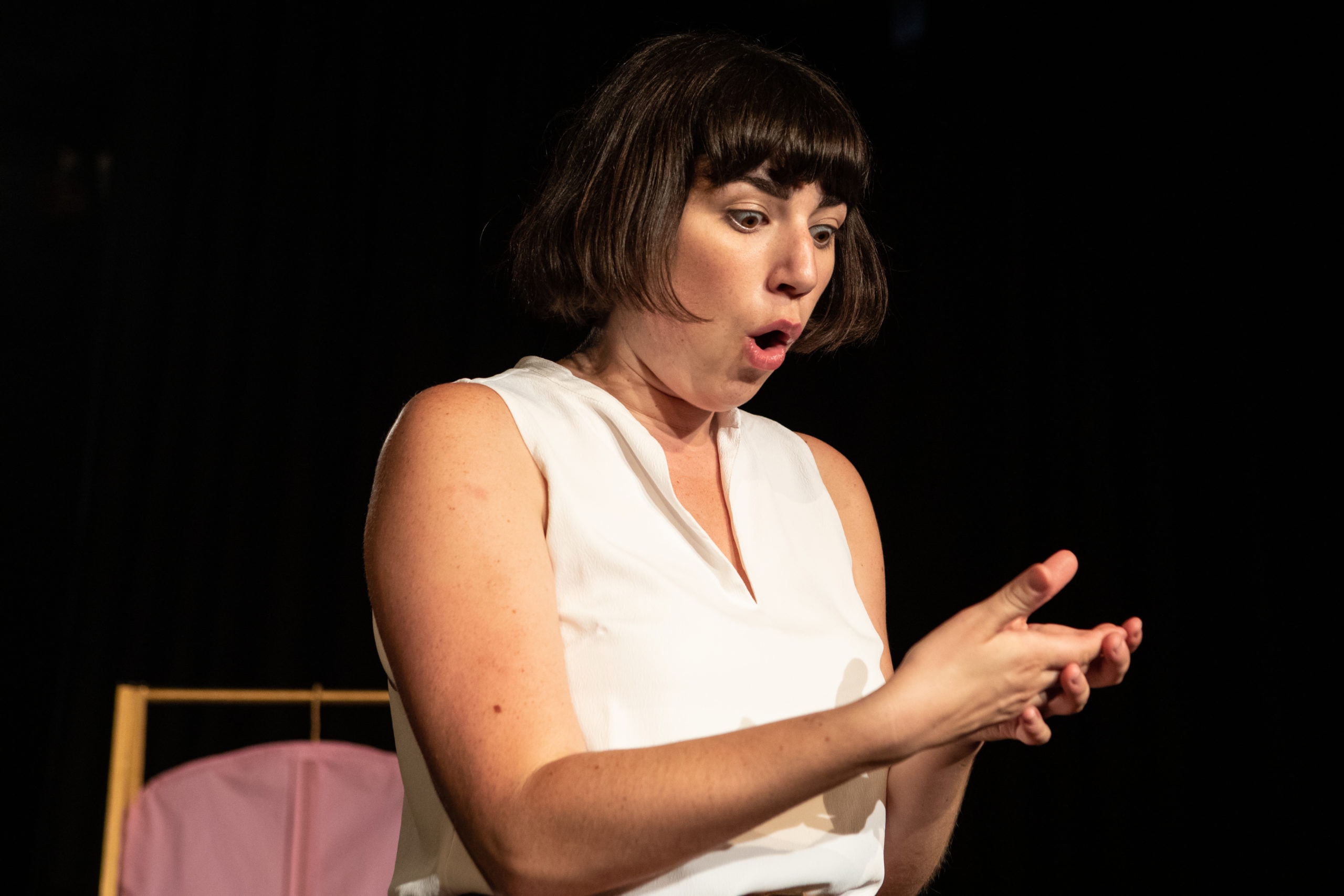 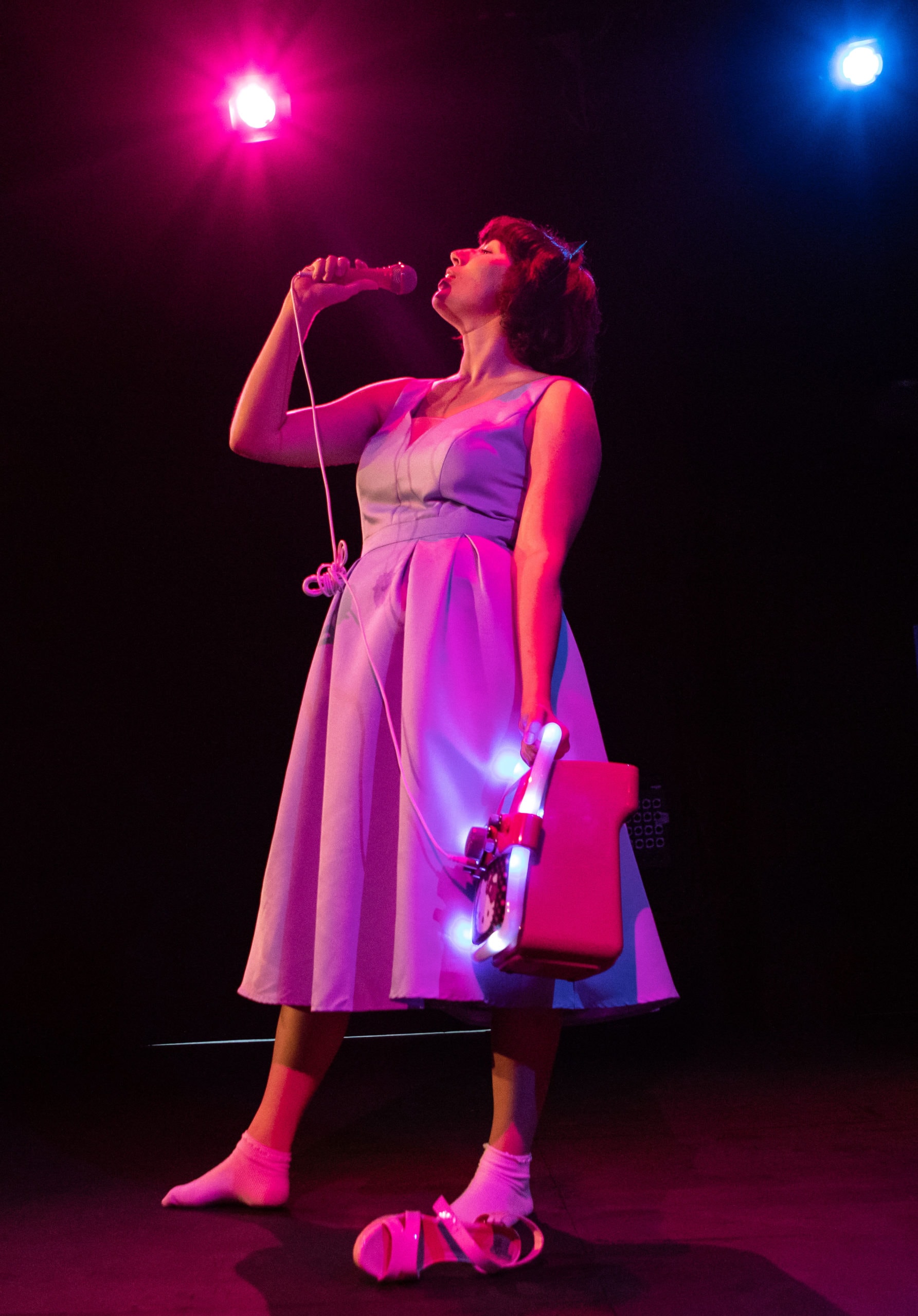 What has devising and developing a one-woman piece taught you about different ways of creating theatre or working? Is it different to how you’ve worked in the past, for example?

Well it was the first thing I’d ever sat down and written on my own, so that was very different to devising in an ensemble or being handed a script and directed. It taught me a lot about the craft of story-telling, developing a narrative and how to get it all to hang together in one arc. Personally I love it! Sitting down and writing a whole play was never something I believed I could do. It felt way too scary. Now it feels like magic to weave a narrative out of your head and onto the page, to see it all coming together. Then there’s a second kind of magic when you take it from page to stage and see how a director can bring out a different meaning or texture to the words through the actor in you, than the writer in you was expecting. I feel like that helped to unlock a playfulness in my acting too – because I’d written it, I wasn’t getting caught up worrying about how the writer wanted the words to come across, and I think that afforded me a greater sense of freedom in rehearsals.

Finally, Algorithms is described as “a bisexual Bridget Jones for the online generation” and likened to Phoebe Waller Bridge’s “Fleabag”. How do you feel about the comparisons being drawn between these characters and your character? Are there any creators, characters or writers who have inspired you along the way?

I think those comparisons were to be expected to a certain extent. Certainly it was a choice to market the show as ‘a bisexual Bridget Jones for the online generation’. I wanted a clear and easy one line pitch to grab punters in Edinburgh. Bridget Jones is such a well known and loved character that the comparison, from a marketing point of view, was very useful and one I chose to draw. Certainly Algorithms was inspired by the Rom Coms I grew up on and how they impacted my expectations of love, and that includes Bridget Jones, which there are several nods to in the play (Gabrielle… Mark Darcy & Daniel Cleaver jokes… an overbearing mother).

Then when reviews started coming out saying it was ‘this year’s Fleabag’ and that the show had ‘the compelling honesty of Fleabag’ I saw those comparisons not only as a good thing for my ticket sales, but also very flattering indeed as I’m a huge fan of that show. I definitely understand the frustration over any one-woman show that talks openly about sex being compared to Fleabag (especially when Michaela Coel’s Chewing Gum came first), but I also think when it comes to marketing, clear and popular reference points are useful. I know the ways in which Brooke is very different to Fleabag (for starters she’s hopelessly addicted to romance and wants to do absolutely everything right all the time whereas Fleabag was a ‘hot mess’), but if the comparison works to get people through the door then I’m not going to turn my nose up at it you know?

Oh loads that have inspired me, but (predictably) I’d say the big two are Michaela Coel and Phoebe Waller-Bridge because they feel like the trailblazers for absolutely smashing it with their one-woman shows. I wanted to write something with a similar ‘confessional’ feel to it. Something that made honest observations about life and then asked the audience: do you feel that way too? 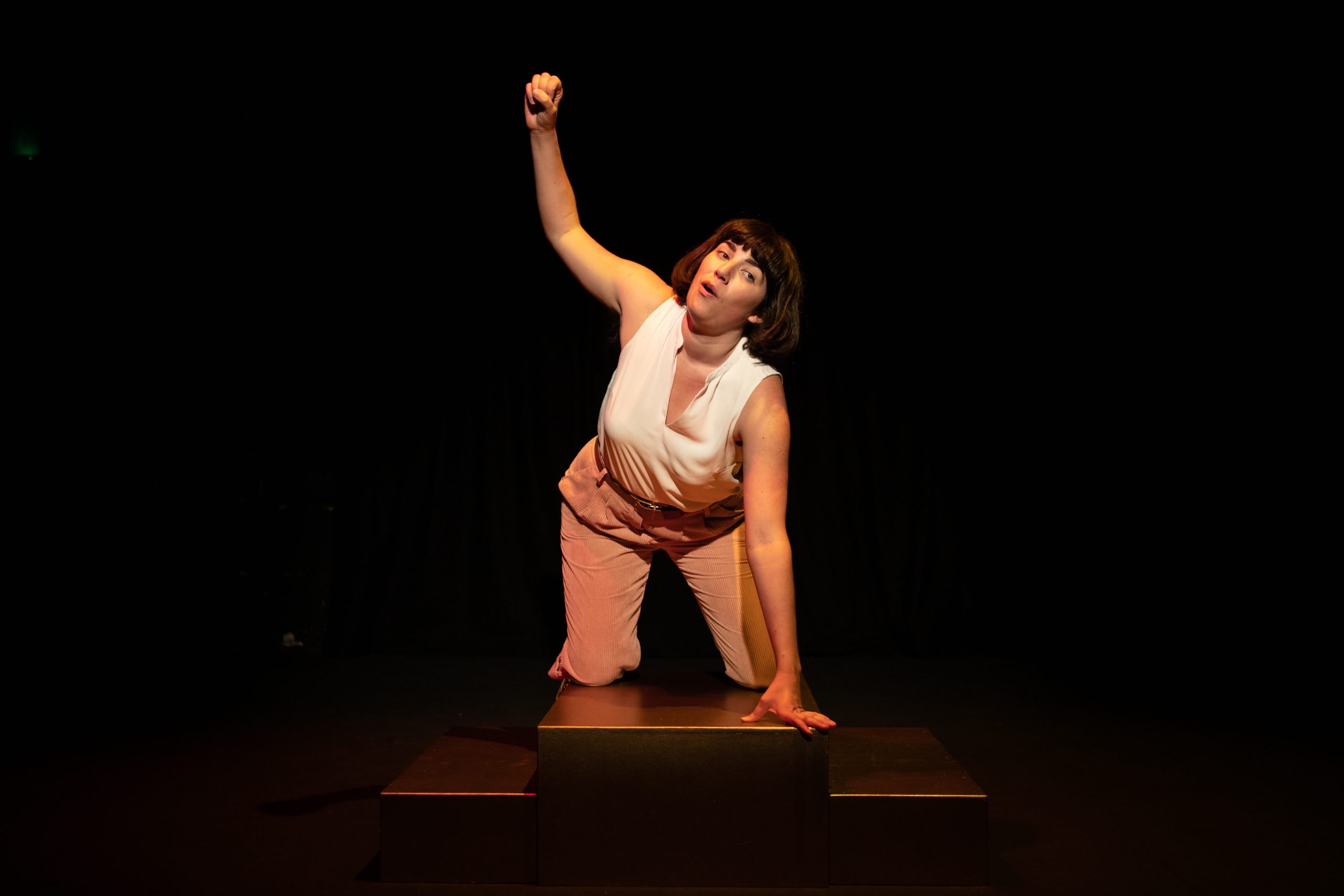 Any Monkeys or Monkey Alumni who are keen to check out a fellow Monkey’s work can see Algorithms at Soho Theatre from 10th – 14th March, and tickets can be bought by clicking the link below. Please note: Soho’s prices are subject to demand so book early to guarantee seats at the best prices!

Watch the trailer for Algorithms here.