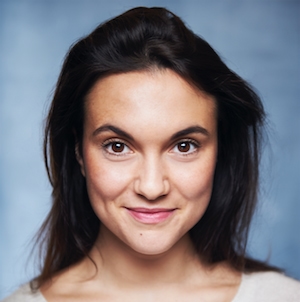 Each fortnight, we’re offering you some Monkey Motivation, in the form of interviews with our alumni.
10th January 2019

In our first Monkey Motivation for 2019, Two Year Rep 2017 graduate Claudia Marciano shares her experience of working with theatre company and friends of Fourth Monkey, Theatre Re

Since graduating, I have been working on further developing my theatre company’s show Clean Mean Eating Machine, as well as planning the next couple of years for Worst Absurd with my co-founder, Ceri Lothian. During the day I have been working for a brilliant PR company and also training for the Brighton Marathon which I am running in April this year!

Since June last year I have been part of the devising cast for Theatre Re’s Birth, and I am very excited to be opening it this Thursday at Shoreditch Town Hall as part of the London Mime Festival!

It’s still quite surreal really. Truth be told, this time last year I was preparing to take a break from performing, as I found the first few months out of drama school really really tough; facing the reality that I was a very small fish in a very big pond. And so, after making the decision to accept a full time office job and leave my agent…I received the offer to join the cast of Birth!

Every step of this process so far has been exceptionally challenging – but as equally rewarding. As some of you will have experienced, it’s an absolute privilege to work with Guillaume and Alex as they honestly create pure magic in the rehearsal room. Their process is like none other I’ve experienced: it’s very fast, and demands a lot from you -emotionally and physically – but at the same time, there’s such a strong sense of ensemble both inside and out of the rehearsal room, so you constantly feel supported.

What’s also exciting about their process, is the fact that from day one of rehearsals you’re already working with most of the show’s elements: costume, props, set and music, so you’re continually making discoveries, and uncovering more possibilities for the characters and narrative.

Can you tell us a bit about the process of creating such a physical show?

I only came into the process halfway through the research and development period, so by then cast had already devised some movement sequences which I had to learn very quickly. The framework of the show had also been drafted, as well as the basis of the musical score, so from the first day we began improvising and devising scenes that brought to life the interwoven stories of the three women. As well as the wings, we use a wooden table as our backstage – which from the start has been a very interesting challenge for the whole devising cast.

I don’t want to ruin the surprise too much – but I’ll just say that we’re trying to convince Guillaume to present a special backstage performance of the show so people can witness the chaos of very quick and cramped changes. We’ve also had to become masters at manipulating two huge sheets – again, I won’t say too much – but the cast have probably spent around two weeks in total trying to learn their behaviour and how to give them the right amount of air – anyone would think we’ve been learning how to sail…

Where will the show be performed?

The show is being performed in the Assembly Room at the Shoreditch Town Hall. The space is pretty epic and I can’t wait to see how the new space impacts on the show’s aesthetic and narrative.

What are your plans following the London Mime Festival?

I will be further developing and performing Birth later this year (dates and venues TBA..) but in the meantime I’ll be returning to my day job and continuing to make plans for Worst Absurd.

Do you have any advice for young creatives who want to work with established companies like Theatre Re?

Stay connected with theatre companies you aspire to work with; attend workshops, try to see all their work and try to attend the performances with a post-show Q&A, so that you gain more insight into their process. I would always advise anyone who wants to work with companies such as Theatre Re to book onto their workshops, not only ones being run by the Directors, but also by any Associate Artists. Yes they can be expensive – especially if you’re already working part-time around other acting work, but they are definitely worth the investment. I signed up for two Theatre Re workshops after graduating – both times causing me to max out my overdraft…but it was definitely worth it. With that in mind, I’ll shamelessly plug Theatre Re’s upcoming workshop running over two weekends from Jan 26th-Feb 3rd.