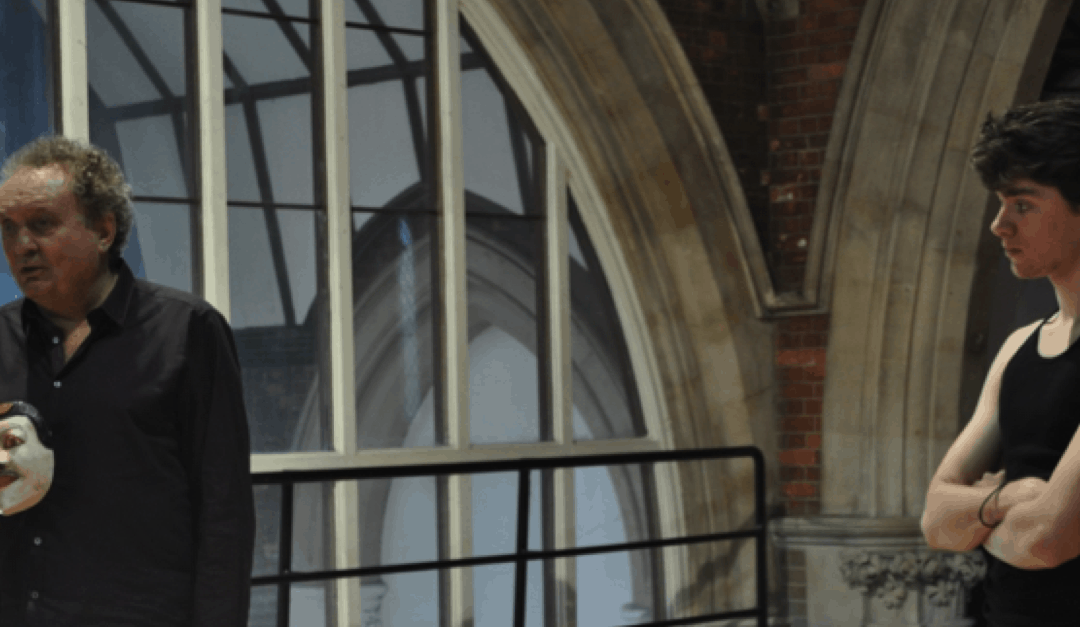 In 2014, we interviewed our then clown teacher, Mitch Mitchelson:

Mitch Mitchelson, teacher of the Two Year Rep’s Clown & Mask, was born in Lancashire but spent a chunk of his childhood in North Africa and Gibraltar. He attended Sheffield University and then went on to do a Post Grad on Drama and Movement Therapy at the Central School of Speech & Drama. In his early days he worked with the Natural Theatre Company, Bath Arts Workshop and Exploded Eye Performance Group. His first workshops include workshops with Gaulier, Pierre Byland, Complicite, Enrique Pardo and Barry Grantham.

His most memorable performance memories are when he played a starving Zanni (Commedia Dell’Arte character) in Paris and one by one the children in the audience started coming up to the stage with sandwiches to feed him which destroyed the entire plotline (meaning they ended up just having a picnic on stage), playing a pin striped bowler hatted city gent in a midnight ballet for an audience of taxi drivers outside Rotterdam railway station, clowning in Japan, stilt walking to a temple in Hong Kong, working on an ensemble show called “Gabriel” based on the short stories of Gabriel Garcia Marquez, playing in a deserted square in Estonia to a family in their car and then finding themselves surrounded by an audience who seemed to come from nowhere, and performing the death scene of Peer Gynt’s mother for an audience of psychotherapists and bereavement counsellors. He has had an interesting journey indeed! “And it never ends” he says.

How did it happen that you took this path in life: performance, clowning, mask, circus?
How long have I got to answer this?! It began really when I joined an arts lab when I was at university. I went to a community arts project and realized that I wanted to work in the expressive arts and connect with people through that, and maybe make a difference, in terms of plays that people were working at the time. I thought there was an energy around there. I wanted to make a difference, change things in some way. And then found it to be a lovely illuminating way of looking at life.

Is that when you found Clown & Mask as well?
I found that a little bit later on. What I wanted to do at the time was study what they called ‘popular forms’, in other words a language that had its roots in popular arts. So that took me to the Commedia Dell’Arte and clowning and circus as languages that I would benefit from in terms of enhancing my theatrical vocabulary. I was really fascinated by it, it’s a way of learning a new vocabulary rooted somewhere in folk memory. And then realizing that within that were these infinite explorations that dealt with the way of looking at the world, in the physical dimension but also the sense of the pathos of being a human being and the joy of being a human being. It makes you feel really alive.

Where in the world has your work taken you?
Japan on four occasions, Hong Kong, Italy, Belgium, Germany, Spain, Portugal, Australia, New Zealand, America, Canada, Greece. They’re all quite special but I really enjoyed Japan. That was fascinating: going to communicate with audiences of a different culture. Hong Kong was fascinating as well. We did shows in a Vietnamese refugee camp where we had to try and make that connection with people with a completely different life experience. All of the international journeys were extraordinary in different ways. I have really fond memories of all those different places and the connections with the audiences that we created. In Greece it was fabulous because we performed in the Theatre of Dionysus in Athens. We stilt walked around the market there, which is what they would have done during the Ancient theatrical explorations. They would have had stilt walking travelling players. First the procession and then to play in the Theatre of Dionysus was very powerful. And then Japan… just the joy of the audiences. I think it has always been about the joy of the audiences and attempting to galvanize that connection. It’s what a lot of the search has been about.

Who are your heroes? Who inspire you?
I think it’s always the silent movie comedians. Chaplin is a great hero. And Buster Keaton. I would say those are my two heroes. I like Laurel & Hardy, I also appreciate Harold Lloyd. I love Beckett for his beautifully melancholic clowning. Brecht. People with epic theatre that penetrates the human psyche.

How did you find Fourth Monkey? And how did you become part of it?
Through Angela [Gasparetto, Two Year Rep course director and Expressive Movement teacher]. Angela was a colleague at some of the drama schools I worked at. She was the Head of Movement at one of them. And we kept a good communication while she was there. When she left, I got a phone call out of the blue to do a clowning and slapstick workshop with Fourth Monkey, which I did last year. And it went down well so I was then asked to become more involved and teach more extensively and also to later on do some directing.

Why do you think Clown & Mask training is so important for young actors?
In terms of Mask it embodies you as an actor. An actor has to be a head-to-toe actor: the whole body becomes part of the communication apparatus. Also, you learn how to be precise and economic on stage but also intense and powerful. I think Clowning brings you into your vulnerability and your stupidity and your humanity. And it’s a way of questioning the world.

If there’s one thing you would advise us to take away from your classes what would it be?
Keep your sense of playfulness, not having a fear of failure, generosity, vulnerability, openness, economy. And be prepared to take risks.

What do you see for the future of Fourth Monkey?
Well, I know that last year was the first year that the Two Year Rep programme started so I guess it expands. I think they want to consolidate, get their own premises eventually. And solidify their reputation. It’s emerging as a very viable alternative way of training actors. I think there’s an inevitable want, it’s got clear foundations and I’m sure exponential growth is possible. Surely, that can only be what can happen.