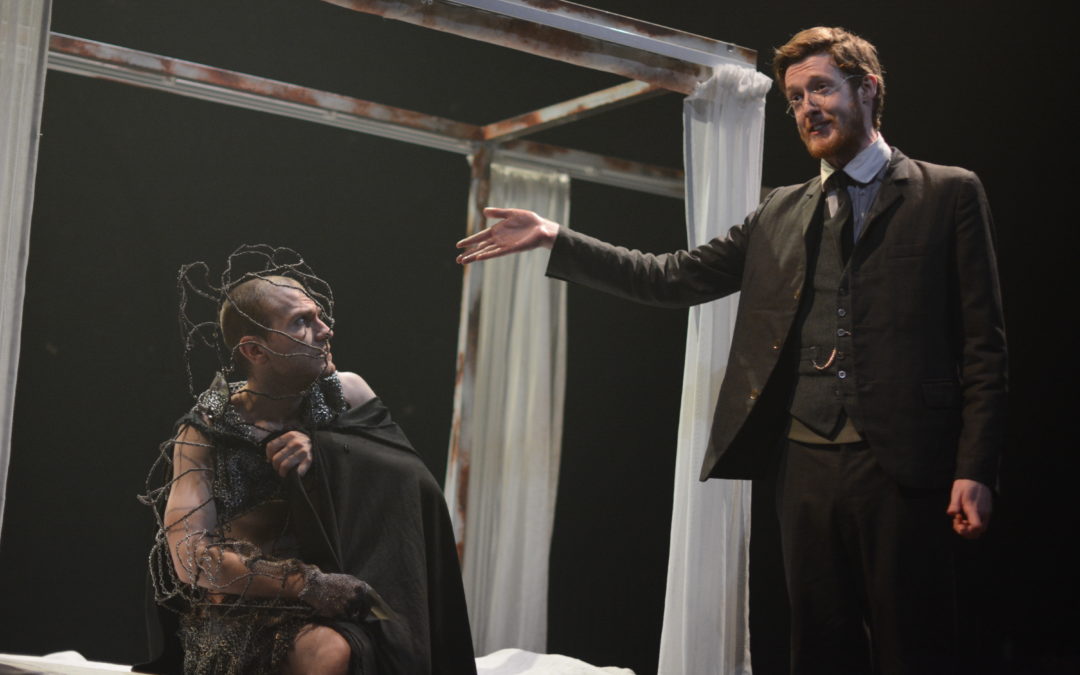 The tour kicked off very early for all of us! I believe I was in Steve Green’s car by about seven am along with Ami (Mrs Treves, Sister Ireland, Lady Knightley) and Zara (Costume and set designer). We were off! At this point the show felt miles away, thirteen hours and counting till curtain up at the Prema  Arts Centre near Stroud.

Three hours later we arrived and it was very refreshing to be away from the hustle of London. Within half an hour of arriving, four horses and their riders passed the Art’s Centres cafe, where we joined the rest of the cast sleepily drinking tea and coffee. The magical production team were upstairs in the studio getting everything ready for the show. It felt more real after seeing the space and we were all anxious and excited to get cracking in equal measure! But now we wait… We each take it in turns to sleep in the studios loading lift, look over notes and after my third coffee we were ready to begin teching.

The challenges we faced with this first space involved very tight wings. Therefore costume changes and entrances and exits became one of the main focuses for the day. A few minutes before the show and Daniel (Joseph Merrick) was preset in his cage growling as the audience settled down and the rest of us were crammed into the wings buzzing with excitement. We were off and it felt so much better to be performing in front of an audience, the intimacy of the space really leant itself to the show and the audience fed off our energy and we fed off theirs!

So, first show down and as soon as the audience were out it was all hands on deck. The lights came down, the set dismantled and our costumes all folded into their respective bags. We then packed everything into the trailer (which is a bit like a game of tetris) and with the irreplaceable Anthony (Production Manager) and Catherine (Stage Manager) in the front and us lot in the back we set off down the winding country roads to our hotel for the night.

As we were going up a particularly steep hill and just after one of us said “Imagine if we broke down!” We broke down.

We pushed the car off the road and called for help whilst Adam (Tuckett, Norman, Golby) serenaded us with his ukulele, it felt a bit like the start of a horror film. After we’d used up our supply of Percy Pigs Anthony called a taxi for us and we were taken the rest of the way to the hotel, all one hundred yards of it. Anthony and Catherine were still waiting for the tow truck so we had to leave them with the car, the following morning we learnt that they didn’t get to bed until 4am! We posthumously named the car ‘Idiot’.

After a few hours wandering around a service station we were off again and on our way to Devon! Anthony and Catherine in the front and us five crammed snugly into the back. We arrived at Woolacombe bay Holiday Park a few hours later, which to my surprise I actually visited with my family when I was a lot younger. Back then I would have never imagined I would be returning years later as an actor with a touring theatre company!

So, the five of us climbed into a static caravan, our home for the next five days. It had been a nightmarish few days but the view from our caravan window made up for that very quickly.

The following day we arrived by taxi to the Queen’s Theatre. The theatre was beautiful but as a proscenium Arch theatre did present us with a new set of challenges. The play had been rehearsed as an intimate studio piece and so when we came to testing the scenes out we quickly realised we had to be a lot bigger vocally and physically.

Over the next few days we had the luxury of being able to rehearse in the theatre with Steve, which was brilliant because it allowed us to fix issues that came up with the show in Bristol and we were able to get a feel for the theatre. These rehearsals enabled us to propel the show to that next level and I felt that bigger characters in the play burst into life and evolved a step further in this space!

The first show went well but was not the best we could do it, I certainly felt that I had a lot more in the tank to give and I remember thinking as soon as I came off from my last scene I wanted to do the whole thing all over again. The second show Steve was very happy with and there was a feeling amongst us, as we routinely packed the trailer, that if we could do the show in such a big theatre then we could do it anywhere!

I should have mentioned before but I don’t quite remember when this all happened. ‘Idiot’ was a lost cause, so he was left behind in Devon which led to the birth of BEN! Our new car, virtually the same as ‘Idiot’ in nearly every way but Ben has been with us ever since and we now trust in him implicitly! No problems all the way home to London. Even if a fault meant that every ten minutes there’d be a beep and he’d tell us the tyre pressure was low, but that’s so Ben! Oh neurotic Ben.

Next we’re off to Jersey! After a four hour ferry ride we arrived at our hotel and to our delight discovered we each had a room to ourselves, a far cry from sharing a static caravan! The following day we walked to the theatre and started teching in another really lovely theatre, in terms of size it was a midpoint between North Devon and Prema and so therefore the piece seemed to adjust nicely. The seating rake was fairly high so we had to bear that in mind. Actually whilst on the subject of seating, I challenge anyone to find a comfier seat than one of the seats at the Jersey Arts Centre!

So the show finished and we again packed everything up and the following day we were back on the ferry. We all enjoyed Jersey a lot and could probably have done with a few more days there but the show must go on… to Cheltenham and Derby that is!

Cheltenham was a much smaller space than we were used to and so spinning the bed frame around was very tight. On the flipside however it meant that the piece could become very intimate again and the two performances we did there felt more and more detailed from show to show. The large characters that came out in Devon also had to come to Cheltenham! Steve said in notes after our first show that we should completely blow the audience away the following night. Almost like we’re taking the audience hostage!

And so it felt as though as soon as we got to Cheltenham we were leaving again! Straight off the back of our second show we were on our way to Derby, listening to a compilation CD of 100 Musical Hits the whole way there. If it did nothing else, it certainly passed the time, making a two hour journey feel like half an hour. We arrived at our hotel (reminiscent from the hotel in the shining) in the early hours of the morning and went straight to bed.

The following morning we made our way to the theatre. Vocally and physically Derby was similar to Cheltenham and so during tech we found that we didn’t have to modify much. Again it was challenging in terms of spinning the bed and the amount of wing space available but we’d started to get used to that by this point! Entrances and exits became a new challenge as we had to come through a curtain, entering wasn’t a problem but exiting in the dark did result in a bit of walking into walls occasionally, mainly by myself. There was less walking into walls for the second show and it seemed to go very well all round, we received a standing ovation and went backstage feeling immensely proud to be a part of this story.

Even though we have 9 performances under our belt, it’s weird; it still feels as if we’ve just begun. In many ways we have. A couple of days ago we did the first of three school performances at Hurtwood House, the second is in a few days and the third in early December. After that we have a month and a bit off over Christmas and then it’s a three week run at the Brockley Jack Studio. Then the second half of the tour begins. There’s no doubt the show by our final performance will have evolved into a completely different beast from the one we just did at Hurtwood and that, I think, is the beauty of touring.