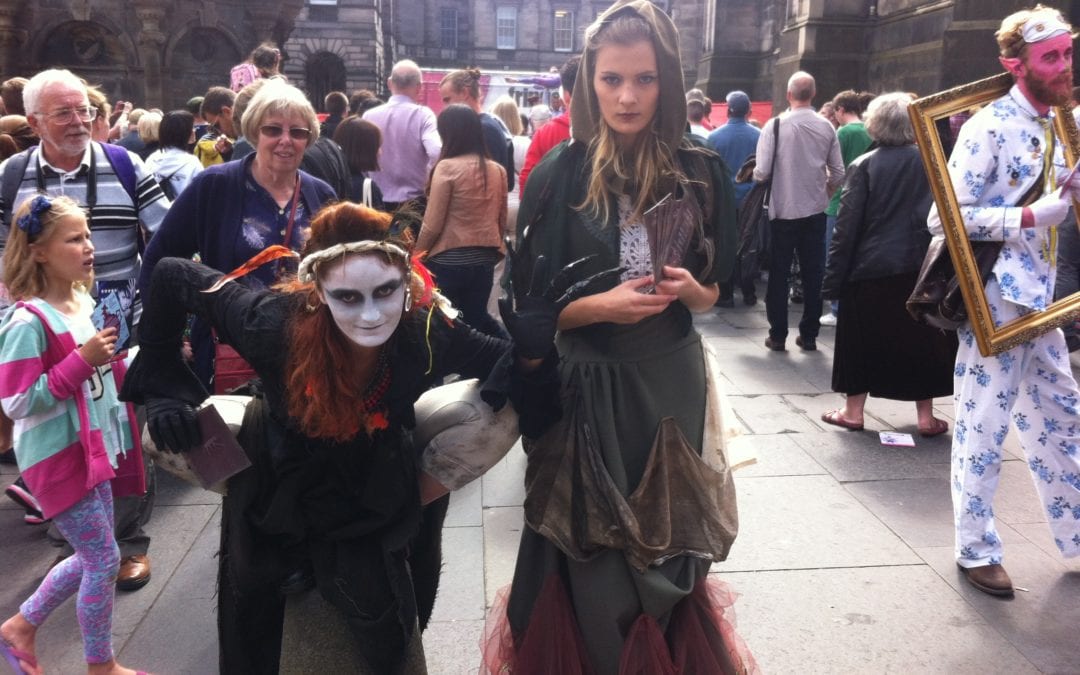 We are five days in to our run at the Edinburgh Fringe Festival and with sell-out shows and a four star review just in it’s so far so good! Year of the Monkey company member Lali Coombes will be documenting their Edinburgh experience through a series of weekly blogs, the first of which is below:

Well, where to start? So much has happened in so little time. After collectively getting lost in Euston station early Monday morning, the monkeys were loaded into a coach by our very patient DSM Annie – only to be faced with ten hours of petrol stations, Harry Potter marathons and obviously, singing. The journey actually sped by, and before long we were heaving overflowing suitcases down to our accommodation, dying for a cup of herbal tea (we’re actors remember) and a nap. The evening that followed was a relaxed one, lulled into a sense of calm by the promise of a lie-in the next morning.

A schedule-less Tuesday left us to explore the Edinburgh day (and night..) life as we pleased, sticking firmly to the maps as we tried to find our venue and other highly important places such as the cheapest coffee shops and Piemaker – best pastry in Scotland. This allowed us to prepare for a gruelling day of tech rehearsals on Wednesday, which released the cast of Little Red Cap after midnight had struck. It was so good to finally be in the space after months of rehearsing, the best discovery by far being the fact that the stage was actually slightly bigger than we initially thought. Panic over. I never cease to be amazed at how much difference lighting and sound can make to a performance, and as the visual impact of our shows started to sink in, the Edinburgh Fringe suddenly felt very real.

I had my first proper fringe experience on Thursday, after our briefing on flyering, a small group of us went to see a one man show at Underbelly before pretty much every One Year Repper went to the preview of Little Red director Steve Sobal’s show Lovesick – which was absolutely incredible (HINT HINT, PLUG PLUG) It felt really great to be able to support other artists at the same time as focussing on our own material, though I’m not sure we were very prepared for quite how many things there were to see here. Everyone has been overwhelmed with flyers with more going on the ‘yes’ piles than we can potentially fit in… 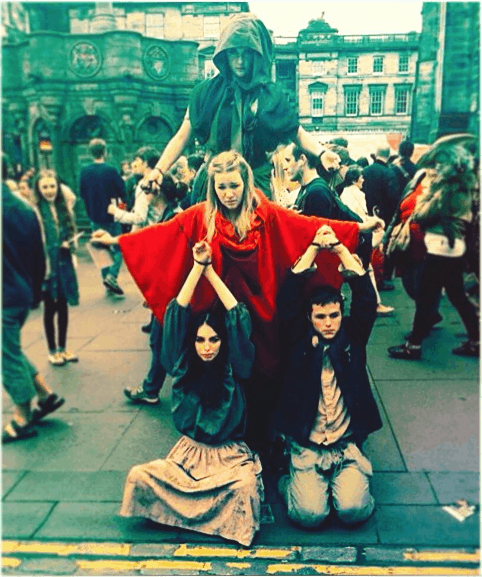 Many of us were slightly daunted by the prospect of trying to sell our show to strangers in public, especially as a small group of us were enlisted to do this is costume every day. However it turned out to be surprisingly easy and actually very enjoyable. For the costumed cast our job is mainly to stand on bollards and be photographed before handing out flyers, and as the days have gone on we have become more and more extravagant with this. Going from standing still and looking scary, we have taken to singing songs from the shows ad tying up characters with shoelaces, whilst witches and sorcery puppeteer them. Even if this might not help us sell the show, I think we’d be having too much of a good time to stop. One difficulty is turning away small girls who are fascinated by finding Rapunzel and Little Red Cap on the streets of Edinburgh but unfortunately are definitely too young for our shows.

There were raised nerves and tensions on on Friday but I think once everyone realised that they were there to do what they loved doing most we all got into the swing of it. The feeling of having a proper (and pretty much full) audience at last after months of rehearsals was so incredible and we all suddenly realised how proud we were of what we created. The fact that the season was so popular on preview night should have prepared us for what was to come, especially when multiple Year of the Monkey’s were turned away at the doors of The Bloody Countess due to it being sold out, as it has been for the past couple of nights along with Hansel and Gretel. This means I sadly haven’t seen it yet but it is well up there at the top of my list. Reviews are starting to sleep out of the woodwork and four stars from Broadway Baby for Hansel and Gretel has got everyone buzzing with excitement. The positive feedback we keep receiving along with our packed out audiences has definitely got us looking forward to what the rest of the month holds.