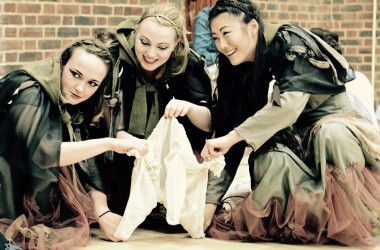 Edfringe comes but once a year, but when it comes boy does it arrive with an accelerated jolt out of a unanticipated blue horizon. This year it has to be said is no different, but after my inner-camp-self personally wrestles with the guilt of placing my cats in a cattery for the duration and signs off the monkey’s for their northward journey on the coaches, (yes plural there are quite a few of us you know), I return to the desktop to fight the final and infuriating battle of clearing my desk and preparing my inbox for it’s annual migration north, and to tackle an arts council funding application to boot. Nothing too complex in this you would imagine, but when you work from three different devices it can at times catch you out as to where what is saved, stored and indeed what could be randomly required when wrestling with a flimsy waterproof and broken umbrella whilst flyering on the Royal Mile…oh Edinburgh tis but a joy!

Yet, for all it’s frustrations, expense and curiosities, not to mention oddities… this annual jaunt northward is so part of the monkey experience it is fast becoming a defining fabric my life. Every year the company and I, along with thousands of other wide-eyed hopefuls along with the more stoic annual returnees make a pilgrimage to the cobbled streets of this otherwise quiet town to impose on the good folk our ‘work’. Some times explorative, some times groundbreaking, at times controversial and others not so…the Fourth Monkey brigade take on the challenges of the fringe with a now customary eagerness and aplomb. It is the final dice of our students year and it is a privilege to annually see them embrace it with such vigour. This year will be no different of that I am sure as I could see in the tired yet excited eyes alight this morning as they boarded the coach. Sentimental? Perhaps. But it is sincere. The Fringe is a logistical challenge like no other for us with a company of 80, four shows and two trucks of kit we don’t exactly do Fringe light. There are probably easier ways to do this whole thing, but our ever loyal and ever fantastic production manager and team would not appreciate the removal of such a challenge, or at least I’m pretty sure that’s what they said…

So it is here and following a profoundly successful 2014 Fringe with a number of highlight shows including the much lauded and sell-out Alice, this years company follow in the footsteps with a sense of optimism and a desire to impose their own legacy on the festival with a bold season of new work, primarily based on the work of the Brothers Grimm. It is a new venture and one full of potential challenges and pitfalls, yet this is why we do it and whether the young fringe press cavalcade applauds it or not we’ll take it on the chin and roll on to the next as it’s all about the experience for our students. The press is nice, of course it is we’d be lying if we said it wasn’t, but after a fantastic year this is for the cast of monkeys. They deserve this, they’ve looked forward to it all year… and although it may not sound like it now…quietly, so have I.