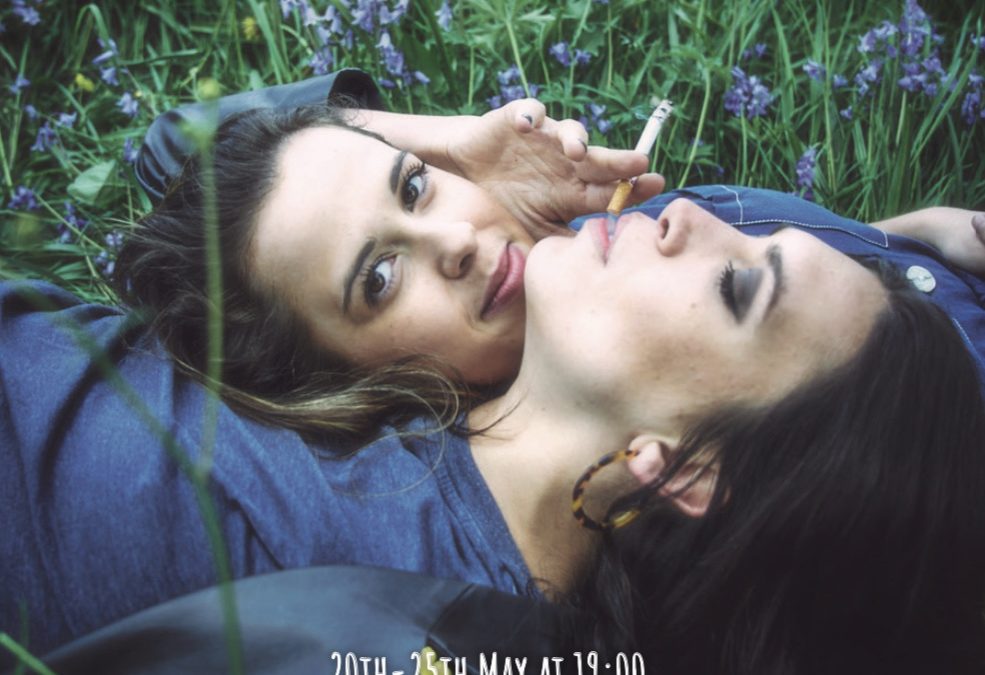 Each fortnight, we’re offering you some Monkey Motivation, in the form of interviews with our alumni.
16th May 2019

Fourth Monkey Alumni Company, DOGMA Theatre, made up of Two Year Rep graduates Filippo Panigazzi, Léoni Hughes, Lily Catalifo and Brendan Lucia are taking their show A Long Way Down to Brighton Fringe 2019. Find out about how they created this new devised show.

Tell us how DOGMA started and what was your initial intention with the company?

DOGMA Theatre Company was formed by Fourth Monkey alumni Filippo Panigazzi, Léoni Hughes, Brendan Lucia, Calum Witney and Italian director Gabriele Colferai in 2017. Our initial intention with the company was to devise original shows based on stories we felt passionately toward and wanted to bring to life. This year we’ve restructured and expanded our company and have brought on two new members; Lily Catalifo, another Fourth Monkey alumni and Claudia Mangini, an Italian actress. We are currently working between London and Milan and have this year started running acting workshops in Italian and English. As a company we are particularly attached to site specific locations and intimate settings, ones which serve to immerse our audiences into the world and lives of our characters. Filippo and Gabri recently wrote and performed a play in a cave at La Terra Degli Ultimi in Puglia and last year DOGMA devised Cabin Fever an original play which was performed at the Monkey House last August for the Camden Fringe.

Can you tell us about your latest project?
Our latest project A Long Way Down is a dark comedy starring Léoni Hughes and Lily Catalifo written and devised by the company and directed by Brendan Lucia. Loosely inspired by Igor Bauersima’s Norway Today, A Long Way Down follows Billie and Eva in what might be the last night of their lives or their first night spent together. The pair attempt to understand one another’s own path through life and question free will, along with self-fulfilling destinies. We wanted to make this show as intimate and site specific as possible so we’ve set up our characters’ world near Beachy Head and will be performing this piece for a maximum of twelve audience at a time inside a 10 man tent we’ve pitched in Brighton.
Can you tell us about the devising and rehearsal process for this piece?
As a company we aim to work collaboratively; Brendan is the director and has led the devising process but there has been equal input into the writing and development of the play from Léoni and Lily. We started by creating the characters using movement exercises and games to understand and inhabit the two women we wanted to portray. Once comfortable with the characters and happy with their relationship we used improvisation to start generating text and found working in this way gives the actors a sense of ownership over the lines. Even though almost all of the dialogue will chop and change, using improvisation to devise this early on makes it feel as if though words are spoken organically by the characters themselves. Once we had a rough draft of the script from transcripts of improvisations we started editing and writing. The three of us worked together with the help of Abi Smith, Artistic Director or Lady Garden Theatre Company, to tie loose ends and get the script to a place that we wanted to work from. Since then we have been rehearsing and with a week to go, think we are in a good place!
How have you prepared for the Brighton Fringe?
We’ve been in contact with press and industry professionals who have helped spread the word and support A Long Way Down, as well as using various social media platforms to create a buzz and give people an idea as to what DOGMA and this show is about. We’ve worked with the wonderful photographer Jim Tobias for our promo shots, posters and flyers and we’re currently working on a teaser trailer which will be out imminently! Aside from this we are still very much a work-in-progress, as most devised pieces tend to be at the start of the process and A Long Way Down is constantly evolving and growing. This will continue to happen as of and when we get audience in the room and we look forward to some constructive feedback we can use to grow and develop the show further for our future runs in London and Italy.
What are your plans for the piece after the festival?
A Long Way Down will be coming to London later in the year. The format of the show allows us to be flexible with our performance spaces; we will be performing in houses, at festivals and, of course, back in the tent if necessary! Alongside performances, we will be putting on fundraising events to support the show and 25% of our revenue will be going to Samaritans saints, who patrol Beachy Head. We are working toward raising awareness and funds for their important cause, one we are particularly attached to due to the nature of A Long Way Down which tackles head on the taboo and controversial trend of double suicide.
How do you bring what you learned at Fourth Monkey to your theatre making?
Everything we do as a company has been shaped by our training at Fourth Monkey; healthy collaboration and mutual respect is always the way forward. We draw upon tools and techniques shared by some the many wonderful practitioners we had the privilege of learning from during our training, from Simone Coxall and Daniel Goldman when devising and working on text, Guillaume Pigé and Angelo Gasparatto when working physically and Sarah Case and Nick Trumble are, of course, a constant source of inspiration! The most important thing we took from our training is calling upon the network of contacts and friends we established at Fourth Monkey. We have two wonderful Monkey alumni associate artists in Max Curtis and Mia Jerome, as well as a whole list of collaborators we use at every opportunity.
A Long Way Down is at the Brighton Fringe from the 20th-25th May. If you’re free and fancy it, do come down and see us! It would be wonderful to have Monkeys there.
Book tickets
VIEW ALL NEWS
Share this...