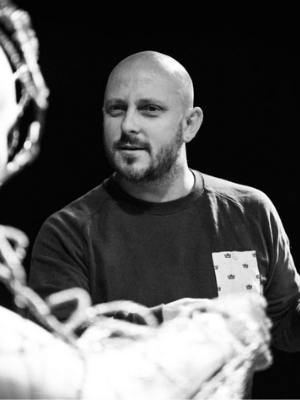 Originally from Devon, Steve Green is the co-founder and Artistic Director of Fourth Monkey. A writer, director and former actor, Steve trained at Middlesex University under the inspirational instruction of practitioners such as John Wright (Trestle, Told by an Idiot), Steve Tiller (The Wedding Collective), John Topping and Huw Thomas amongst many others. The experimental and risk-taking training environment that existed at Middlesex, on their celebrated BA Performing Arts course led Steve toward what has been both a diverse, far-reaching and collaborative career within the arts. Working extensively first on screen as an actor, before transitioning to director and producer his work has always tried to push boundaries and challenge perceived convention within the sector. Fourth Monkey’s training is an embodiment of Steve and co-founder Charleen Qwaye’s vision and experience and one that is borne of a sense of play and a desire to demystify the actor training sector.

Charleen and Steve have collaboratively developed a clear educational philosophy founded in ensemble, exploration and inclusion, forming the foundation of the Fourth Monkey pedagogy, brought to life through Charleen’s exceptional and innovative course design. The work, like in life, is ever evolving and the collective Fourth Monkey initiative is to ensure our training is always current, relevant and at the forefront of positive change within the sector.

Steve’s directing credits include: Titus Andronicus, Tamburlaine the Great Part I & II, Julius Caesar, Plasticine, Ascension Part I & II, The Peculiar Tale of Pablo Picasso and the Mona Lisa, One Flew over the Cuckoo’s Nest, Nights at the Circus, Elephant Man, 4.48 Psychosis, A Clockwork Orange, The Penelopiad, The Love of the Nightingale, The Pope and the Witch, The Crucible, Waiting for Godot, The Caretaker, Metamorphosis, Pass it on, The Creation of the World and other business, Overdue, Left Luggage, Oh What a Lovely War, Shelter, Playing the Victim, A Game of two Halves and Inamorata. 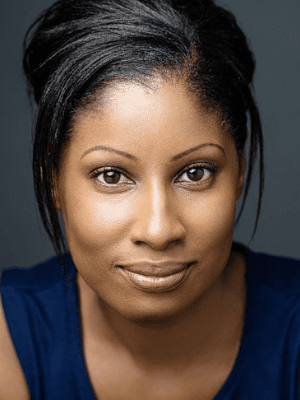 Director of Training and Deputy CEO

Charleen Qwaye was born in Whitechapel, and grew up in Barking, Essex, where her family still live. Her first professional performances were at The Broadway Theatre, Barking, and Queen’s Theatre, Hornchurch. As an avid supporter of local theatre, both for the community and indeed for local talent, Charleen and her family continue to support the variety of shows these theatres programme.

The only black female Co-founder of a drama school in the UK, Charleen is Fourth Monkey’s Deputy CEO and Director of Training as well an actress, choreographer and director, and a huge advocate of diversity and inclusion across the arts sector as a whole.

Charleen’s theatre credits include: The Butterfly Lion at the Minerva Theatre, Chichester, A Midsummer Night’s Dream & Our Country’s Good at the Tobacco Factory, The Curious Incident of the Dog in the Night-Time for the National Theatre at The Gielgud, UK tours of Chicago, Chess the Musical, I Can’t Stop Loving You, Oh! What A Night! and Viva La Diva, the European tour of The Blues Brothers and This Is The Night at Richmond Theatre, Kiki’s Delivery Service at The Southwark Playhouse, The Taming of the Shrew & Doubt at the Landor Theatre, 4:48 Psychosis at the Edinburgh Fringe, The Full Monty at the Charing Cross Theatre, Elephant Man and The Peculiar Tale Of Pablo Picasso and The Mona Lisa at the Brockley Jack, performances of Classical Spectacular at the Royal Albert Hall. Charleen has worked on rehearsed readings and work in development workshops including The Alice Birch Clean Break Project, The Malady of Death, Don Juan, Hyenas in Petticoats, Angels in America Part 1, Welcome! Up Next (all The National Theatre), The Bronzeville Project, Tarento Productions and Coming Clean, Ray Kilby. Her TV and Film credits include; Jerk for Somesuch Productions, Mind-reading Algorithms for Fat Rat Films and Crimes Stories for ITV.

Meet the rest of the team!