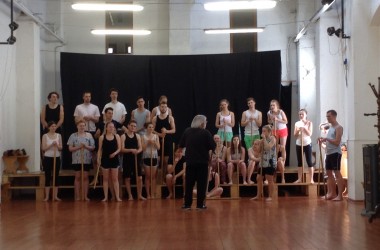 Final week has arrived and I don’t think anyone saw it coming!

This week has been slightly different to the first three weeks of training – instead of learning any new characters or having ‘lessons’, we have spent the week preparing for our final canovaccio (performance). On Monday morning after a quick overview of some of the main characters, Antonio gave us the title of our final canovaccio ‘Ma Che Bella Guerra’ or ‘What a Beautiful War!’ Three companies, each performing a different act of the story, were then formed as Antonio explained the situations and plot line of the piece. And that was it – we were then left to our own devices to create, rehearse and perfect our individual acts.

Monday afternoon and Tuesday were spent improvising around our individual story lines, and figuring out how we could incorporate and use the skills we had learnt this month. It was incredibly interesting to be able to work with a full piece of Commedia as up until now we had only been working on short little scenes. It was also incredibly daunting as we had never worked on something of this size in the Commedia style before. Everyone jumped right into the work and used everything we had learnt to add to the piece while also coming up with our own tricks and ideas to add a little monkey flare to the performance! On Wednesday morning we showed Antonio what we had created so far – talk about nerve racking! However Antonio seemed very impressed with the work we had created, and only had a few pointers to help us improve for the final performance. We had a short break from rehearsals on Thursday morning when Antonio gave us a talk on everything you could want to know about mask and showed us the different stages he goes through when making a mask, the tools he uses and how he goes about creating the character the mask belongs to. This was incredible to listen to, and the amount of knowledge that Antonio has about mask and the field of Commedia Dell’Arte is just mind blowing. That afternoon the company as a whole decided to showcase our acts to each other so that we could practice in front of an audience and so that the actors playing the same character in the different acts could see the other versions of that character. This was incredibly helpful to all as we could see where the piece was going. It was also a moment where the entire company came together to support each other and give advice or comments on the work that was being produced.This really showed how close and how professional the company has become.

And then the day arrived – the final canovaccio and also our last day as first year Two Year Reppers! After more rehearsals and another run through of the entire show, we said goodbye to the studio that had accommodated us for the last month and travelled to the Civici Musei where we would be performing our canovaccio that night. The courtyard where we would be performing was absolutely beautiful, the stage surrounded by building ruins and trees but much to Pedrolinos dismay, no ceiling (that’s the only in joke, I swear!), The dress rehearsal went brilliantly – well, with only a few new performance space hiccups! Then it was time for the real thing to an audience. While there were nerves floating about, the relaxed atmosphere Antonio had created for us during our months stay meant that we were all ready to enjoy ourselves and just have fun while we were performing. And that we did! The audience were really engaged with the piece with the entire performance going smoothly.

Dina had once again been an angel and had prepared an amazing meal for all of us after the show which we all devoured along with a few glasses of wine! However, once this was over it was time for the goodbyes and we were all sad to have to say goodbye to Antonio, Cecilia and Dina but not before promising to come and see Antonio when he next performs in London (Antonio, if you read this, we are all holding you to this!).

The final weekend was spent milling around Reggio Emilia, buying last minute gifts, one last trip to the water park and generally enjoying our last few days in this beautiful city. It was topped off by a goodbye meal with the entire company and a last, heartbreaking farewell to Emilia’s gelatos – which i think i will miss the most!

Monday arrived, the airport called and just like that it was all over! We have all had the most incredible month in Reggio Emilia and it has been the perfect way to end an exciting year at Fourth Monkey. We’ve all learnt so much, not only from our practitioners but also from each other and have had so many memorable experiences – roll on second year!