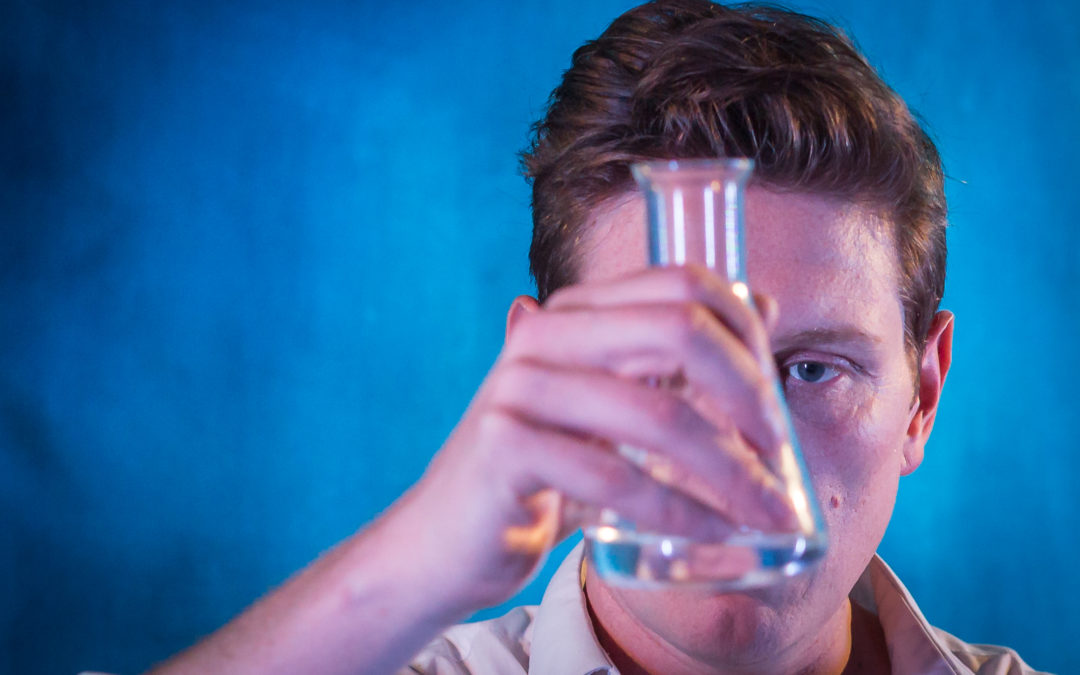 We spoke to Fourth Monkey alumni and members of Arrows & Traps Theatre Company, Lucy Ioannou, Conor Moss and Laurel Marks as they embark on their roles in the company’s most recent productions, Chaplin: Birth of a Tramp and The Strange Case of Jekyll & Hyde, and asked them to share a little bit more about what they learned during their time at the Monkey House, their experiences working as part of a touring ensemble and any advice they may have for prospective students… 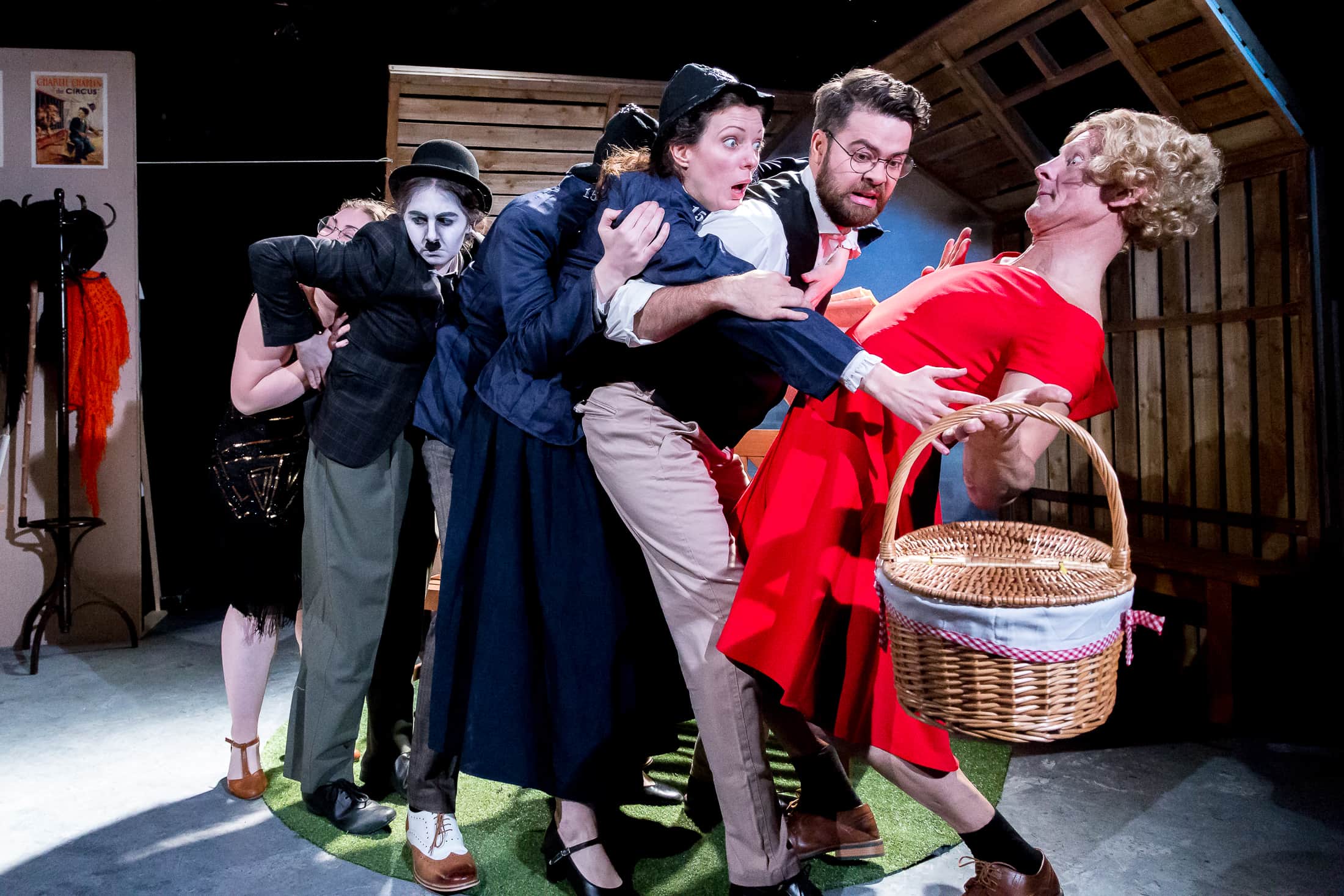 LI: When I applied to Fourth Monkey I was very keen on finding a training programme which focused on nurturing and strengthening an actor’s abilities rather than striping them them down to the bear bones and rebuilding them into what an actor “should” be. Fourth Monkey’s course also offered a huge variety of training methods taught by some of the most incredible tutors.

CM: On the audition day – meeting the practitioners and learning about the core values Monkey had really convinced me to go to Fourth Monkey.

LM: I chose to audition because of the emphasis on physical theatre within the training and then I chose to attend due to how relaxed, welcoming and fun my audition experience was, I felt I was viewed as a person rather than a number.

LI: I had the wonderful opportunity of playing the role of Brutus in Julius Caesar for our Classical season, which actually ignited a love for Shakespeare. Up until this point I heavily disliked the majority of his work, most likely because I simply did not understand it. However, working on Caesar, in addition to text work in vocal classes, seemed to change that.

CM: The wide variety of industry guests that influenced us. From movement to mime to clown to dance – it was a wonderful mix that definitely impacted my learning.

LM: The wide variety of practitioners and industry professionals we were taught by. They were all incredibly knowledgeable and nurturing.

LI: Honestly, I had no idea what would happen. I think when you go in to a career in acting you can so easily get carried away with the notion that you’ll train, you’ll graduate, you’ll go out in to the industry and then get your lucky break, and from that point it will be smooth sailing. That is far from the reality of it all. It’s a tough world to commit yourself to, and you have to be willing to work hard and give your life to the industry.

CM: Difficult. I always imagined it would be difficult & it is! Drama schools are geared towards Theatre first and foremost, so post-grad life has been trying to incorporate the skills & techniques learned to help me in the wide and varied industry.

LM: I try not to put too much pressure on the future, I knew it was going to be hard so I made sure I was well educated on the industry and put in a lot of hard work, luckily it’s paid off. I’m doing exactly what I wanted to be doing, however I didn’t expect it to happen so soon. 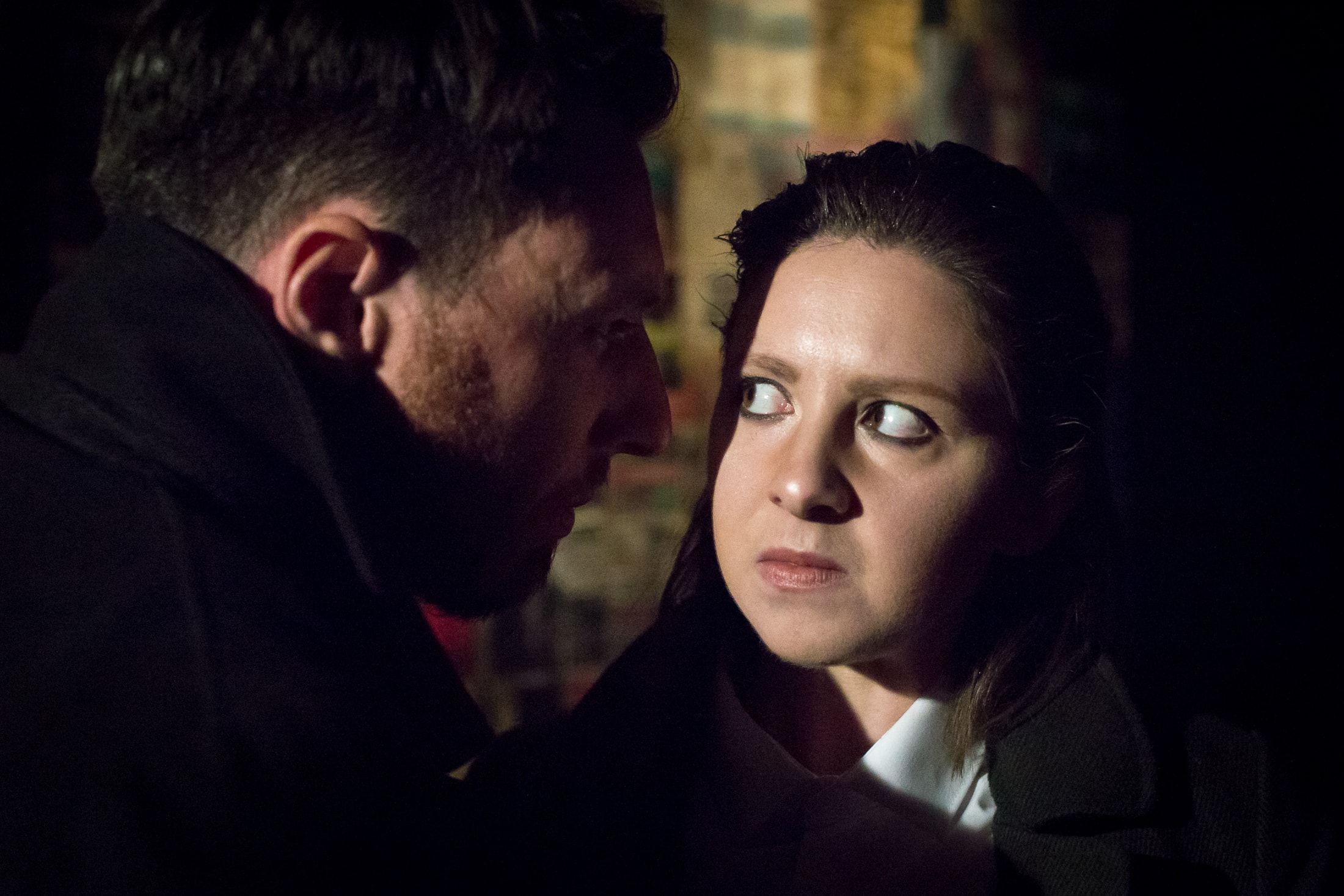 LI: Since I graduated in 2017 I had roughly a year of no work, not even getting in to an audition room, which was tough to say the least. However, in 2018 I auditioned for Arrows & Traps Theatre Company for their production of ‘White Rose’ which was about the incredible true story of Sophie Scholl and the other members of the White Rose Nazi resistance group. I was lucky enough to get the role, and from that point onwards I have been a core company member of Arrows & Traps, which is a highlight in itself. I have now performed in 8 of their productions and am about to embark on a national tour for the two most recent: ‘The Strange Case of Jekyll & Hyde’ and ‘Chaplin: Birth of a Tramp’.

CM: Working with the wonderful Arrows & Traps theatre company. A company I met whilst they were teaching at Fourth Monkey – a fortunate meeting!

LM: I met Ross McGregor during my training and was fortunate enough to assistant direct for him straight out of drama school, through that I met Kate Bannister and Karl Swinyard, all of them have been instrumental in everything I have done since graduating, I cannot extend my gratitude enough. Highlights have definitely been Chaplin: Birth of A Tramp, Gentleman Jack & TARO, as well as becoming an associate artist of Arrows & Traps and The Jack Studio Theatre. Work has been pretty constant for the last couple of years, I’ve been doing a lot of assistant directing and stage managing as well as acting, it wasn’t my aim but it’s a great way to work with new people and I have learnt so much from every production I’ve worked on through a variety of companies and venues.

Can you tell us a bit about your experiences of rehearsing and preparing for a touring production? Any advice for anyone about to embark on a similar project?

LI: Honestly I see very little difference, in terms of rehearsals, between a touring and non-touring show. I would say that you should be willingly to take on responsibilities that an actor my not usually take on, such as rigging the set or being in charge of tracking and packing props. It’s all hands on deck, but this is something that I am used to, even with non-touring productions. I believe that every actor should be willingly to do the same. Life in a show is so much easier when everyone is pulling their weight.

CM: Relax and prep as much as possible. It seems obvious but having as many tools at your disposal is invaluable to gearing up for a long run.

LM: This rehearsal process has been the most fun I have ever had. If anyone is working on anything with a similar comedic style to Chaplin’s work my advice would be watch all the material that’s out there and dive in, in a style like this nothing is too ludicrous.

LI: I am always excited to work and collaborate with new people. And this is such a small industry that you just never know what opportunities may come up.

CM: Nicholas Hytner has made wonderful ensemble pieces at the Bridge Theatre in the last few years – I’d love to get into that setup, even as a fly on the wall to see how they create their pieces of theatre!

LM: I will try to continue to work with Arrows & Traps, I know I’m going to be constantly challenged alongside having a lot of fun. I’ve always really enjoyed Jeremy Herrin and Katie Mitchell’s work so they would be my dream directors to work with. I’ve also worked alongside Kate Bannister a lot but never as an actor, I’d love to get the opportunity to work with her on the other side of the table.

As we move into ‘audition season’ here at Fourth Monkey, what are your three top tips for any prospective students on audition day?

LI: Preparation is key! Make sure to do your research on both the role/play but most importantly the company or person that you will be auditioning for.

I believe that a positive attitude is also important. The panel are wanting to see if they can work with you, not just to judge your acting abilities, so you want to give a good first impression of yourself. And like I said before, it is a very small industry. Chances are that at least one person on the panel knows someone you have worked with previously.

And finally, relax! Or if that is too vague for you then simply breathe. I know that they can be incredibly stressful situations to be in, and why we put ourselves through them I will never know, but the best thing to do is just stop and take a breath. No one wants you to fail, everyone is there to support you and to help get the best out of you. And give yourself a break, if you don’t get it or something goes wrong it is not the end of the world, so go easy on yourself.

LM: Do the work, don’t over think and enjoy yourself. 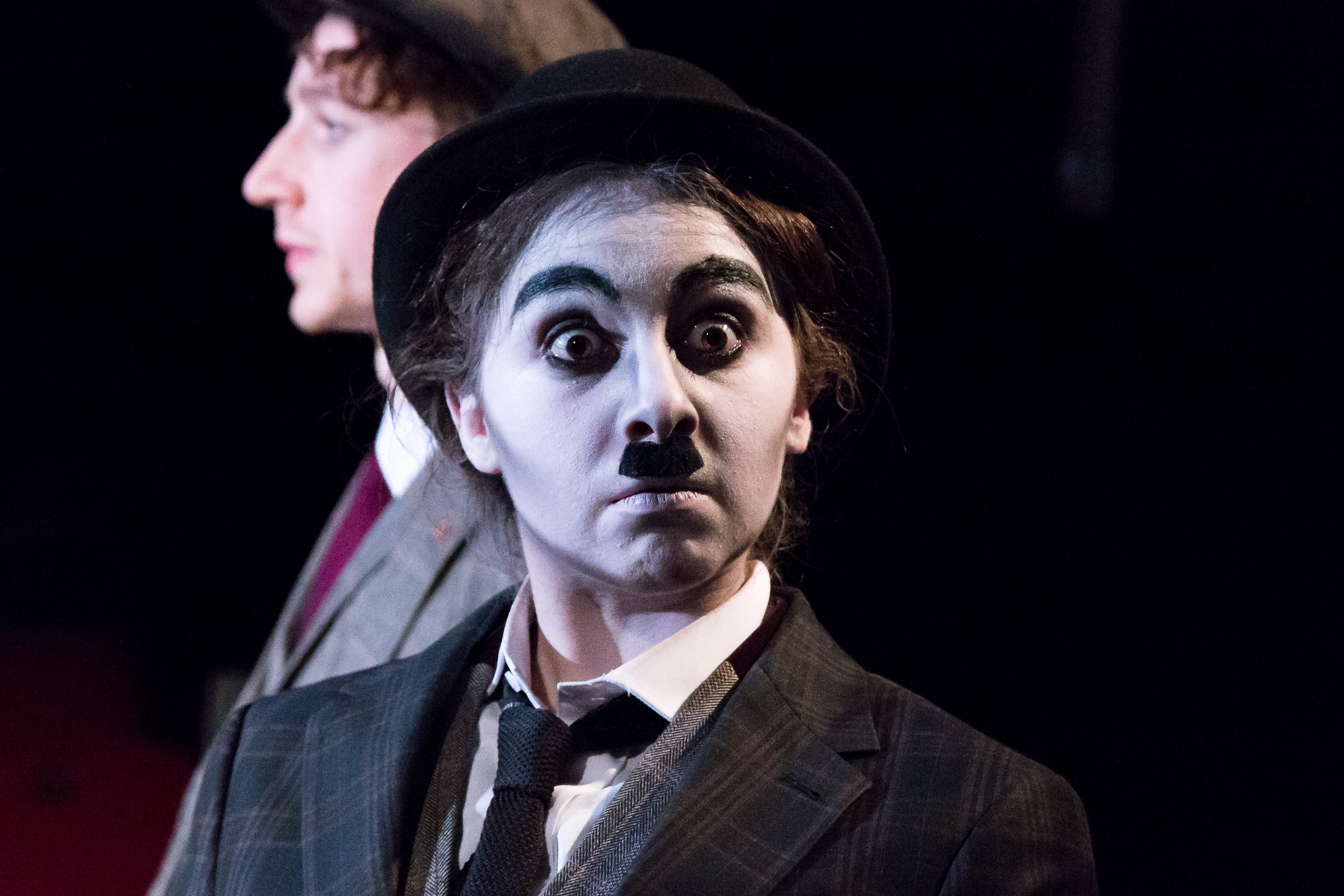 Arrows & Traps are a repertory theatre company, specialising in putting their own, unashamedly modern spin on classic, familiar texts, resulting in vibrant and arresting pieces that are still anchored in the original words and language.

Arrows & Traps are performing Chaplin: Birth of a Tramp, an interpretation of the “rags to riches” tale of one of the most important figures in cinema’s history, at Brockley Jack Studio Theatre until Saturday 22nd February and ticket prices start from £13 for concessions. Anyone interested in seeing some of our Monkey alumni in action as part of the fantastic ensemble cast can book tickets via Arrows & Traps’ website.

They will also be touring The Strange Case of Jekyll & Hyde, their critically-acclaimed modern twist to Robert Louis Stevenson’s iconic gothic classic, reimagining it as a gripping political thriller set in the halls of American power, at selected locations in the UK from 6th February to 3rd April and tickets are available to book via their website.